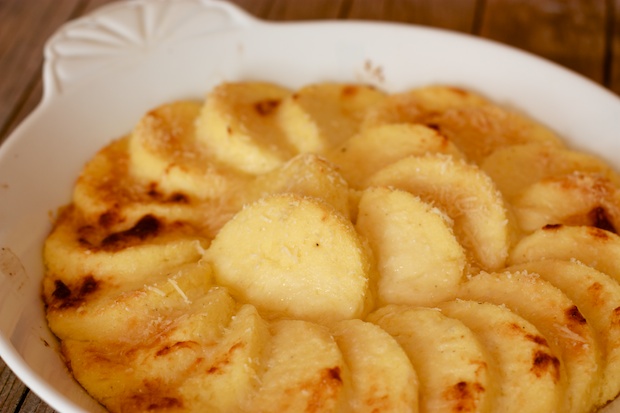 Semolina gnocchi entered my family menu when Andrea (my son) was two years old. Andrea, as I was able to tell, it was absolutely uninterested in food, he used all his energy towards games. I always had to invent something that seemed like a game. The gnocchi were also an opportunity for me to understand that he was developing an aesthetic eye that was revealed when he became older.

The preparation is very simple, but you some leftover dough remains from the cutout circles. To get help from Andrea, I used to put one of my aprons around him and he would climb up on the chair and help me make the gnocchi by cutting out the circles from the plastic stamp.

One day, after preparing a wreath of gnocchi, I told him to try to fix the leftover trimmings in the center and I walked away from the table. After a while, he called me in with his finger (at that time he only knew a few words) and showed me what he had done. To my surprise he had moved all the trimmings into the pan with harmony in an arrangement that I would not have been able to do. Of course I praised a it a lot. That day he ate his portion of gnocchi without stories and from that moment was one of his favorite dishes.