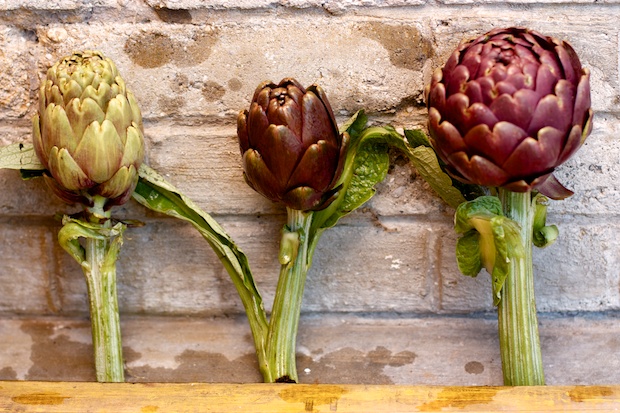 When you purchase artichokes they should not have dark spots and you can recognize their freshness by touching them. They should be tight and the artichoke that should be firm. Soft tissues are more bitter and stringy.

Artichokes are the ideal vegetable to prepare for the spring. In fact, their purifying properties are good for cleaning up our blood and liver after the winter. Artichokes are a good source of fiber. They contain potassium, magnesium, phosphorus, iron, calcium and vitamin B1. They are a Mediterranean plant and are grown mainly in Italy, France, and Spain. It is said that Catherine from Medici brought artichokes from her native Tuscany to the French court where she was married to Henry II, in 1533. The Spanish and French conquerors spread artichokes cultivation in California and Louisiana. In recent years, Peru has begun an extensive cultivation of artichokes, becoming a major exporter. In Italy we make great use of artichokes because we are the biggest manufacturer in the world. Almost 50% of world GDP are Italian.

– EARLY present in the market during the winter.
– LATE in the spring.

They can be purple or green, unarmed or spiny.
The best known are:
– The Roman violets (mammole romane)
– thorny artichokes from Sardinia

Artichokes should also be signaled a real treat: the “castrature” island of Sant’Erasmo in the Venice lagoon. If you happen to be in Venice in the spring and see some vegetables at the vegetable stands, try this product and prepare it raw according to the recipe that you will find in the blog. Small artichokes that are cut from the mother plant allow other artichokes grow more vigorous.

Artichokes can be eaten both raw and cooked. Preparing them is not hard, follow the instructions found in the recipe for “Roman Artichokes”.