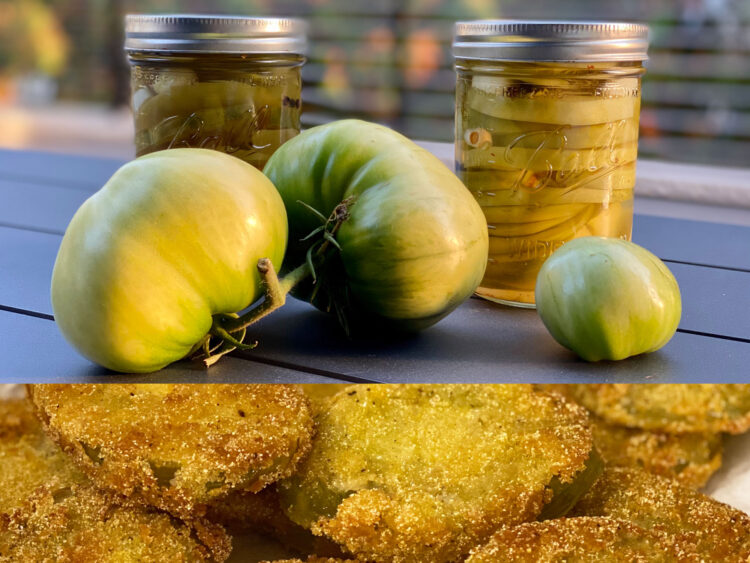 The other day Andrea came home with the largest ziplock bag of green tomatoes I have ever seen. They were left over from the office garden that his boss lovingly attended all summer long when no one else was there due to Covid. My eyes lit up – you can ask anyone that knows me that I will never throw anything out & love it when I get extra vegetables from people’s gardens, it gives me a change to be creative and experiment in the kitchen! I thought about all the things I had always heard about doing with green tomatoes and decided to try 2 of them – fried and pickled.

I had been using some pickled tomatoes my friend Letitia got me from the free farmers market in Salem on my breakfast tacos, it gave them that extra acid you need nestled beside greasy eggs & cheese—I knew that had to be one of the recipes. I decided to experiment with what I had (my usual style of cooking and inventing recipes) which was a lot of apple cider vinegar and bourbon – hey – part of my family is from Kentucky, it’s my roots, so I always have it on hand. Andrea said they were quite amazing on his tuna melt as well.

Fried green tomatoes are an American staple in the south and I’ve always been obsessed with anything involving cornmeal so that had to be the second recipe. I’ve been using my Weber with the side burner to fry things outdoors all summer long. No mess in the kitchen and outdoor/indoor living which I love. In the spirit of using what I had, I didn’t have American cornmeal flour and had some yellow Italian yellow polenta flour which I substituted instead, they turned out so addictively crunchy.