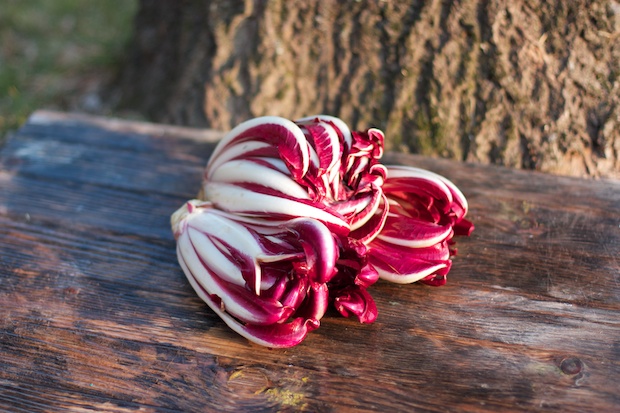 The story of this vegetable ties together the garden with the yard. Between 1860 and 1870, a garden expert was called to “Villa Palazzi” (now Taverna) in the municipality of Dosson to build an English garden. During the construction of the garden, the Belgian Van Den Borre experimented with the imbianchimento (whitening) technique (well known in his country and applied for Belgian endives). Thus Radicchio di Treviso was born, also called “Winter Rose”. The first exhibition of the vegetable was presented in December 1899.

This radicchio is sold between December and March. It is divided into precoce (early) and tardivo (late) varieties. It has depurative and laxative, aids digestion, stimulates liver function and bile secretion. Radicchio is rich in vitamin A and C, B1 and B2, and also a small amount of PP. Radicchio is full of minerals.

Today Italy produces around 1,200 tons of radicchio and it is sold in Italy, the United States, France, and Germany. When you buy Radicchio di Treviso make sure that the radicchio has a dull red with crisp leaves, the roots must still be clear without spots.

Radicchio di Treviso can be eaten raw, breaking the leaves in a salad, cooked – grilled, baked, stewed, used in lasagna, risotto or as a side for fish and meat.
It can be stored in refrigerator and wrapped in paper for 4/5 days.