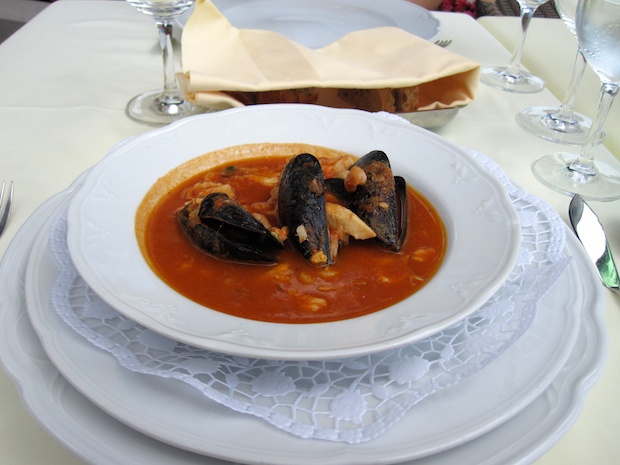 To confirm that the kitchen and the table are the mirror of the culture of the country and present socio-economic situation at that time, I thought I would recall our summer experiences (mine and my husband’s) through four tables settings on which we sat to enjoy a moment of peace and relaxation. The places are very different from one other as well as were the foods that we tasted. In all cases it was the beautiful experiences that have left more than the pleasure of a good meal.

Table of HOTEL MILLEIJ
What you see in the picture is a delicious fish soup. It was preceded by a crostino with creamed cod, typical gastronomy of Trieste, but apparently exported to the neighboring country of Croatia.

OPATIJA
Abbazia is a resort near the city of Rijeka in Croatia. Obatija was Italian and was ceded to Austria after the First World War. There are still signs that symbolize the reign of Italy. These are most visible in a beautiful promenade that follows the sea several kilometers, where the manholes still bear the inscription: Comune di Abbazia – Regno D’Italia. In the seventies, when we lived in Udine, we often went because in an hour and a half we found ourselves in a beautiful and very different country than Italy. In those years we used to go to Hotel Atlantic to eat a “chateaubriand” (a nice piece of meat for two) and that alone was worth the trip.

Over the years our interests changed and Yugoslavia was overwhelmed by a civil war so we did not return. This summer, after several years, we decided to retake a trip along the Croatian coast and the Dalmatian Islands, in the places that we used to travel. With great pleasure we found out that everything has changed, only nature and the landscape, while still wild at times, is sweet and cozy still the same. The hand of man has acted only on what over the years has produced and improved. I was impressed by the professionalism of bars, restaurants, and hotels. Everyone has a uniform and in the more simple and homely trattorias, the waitors serve you with flip flops and shorts on as unfortunately happens sometimes to us in Italy.

I remembered impersonal places, with indifferent waiters, food from barracks and no aesthetic care in the presentation. This revolution has excited me because it helps us to understand once again that “if you want something enough you can make it happen”, but at the same time it made me sad thinking about the decline in which Italy is heading. 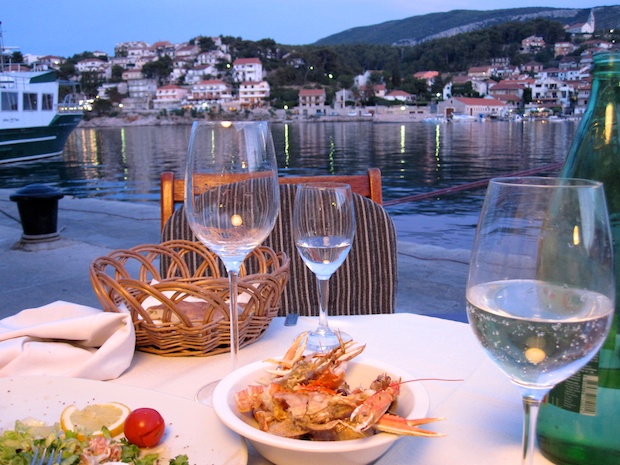 This table was prepared by Napoleon restaurant on the pier in Jelsa, a small town of the island of Hvar (in front of Split) and was an opportunity to admire a beautiful sunset, nibbling on tuna carpaccio with citrus fruits and freshly caught prawns.

The island of Hvar, which seems to have been one of the most sought after this summer is a place of peace where you can feel the slowness of the past. The sunny coasts of the island are opposed to the cultivated land of the interior. During our short stay we were able to view the gathering of potatoes that were sticking out from the clay powdered earth. The farmers present were happy and seemed to have worked almost effortlessly. The potatoes were very nice but my husband and refused to stop the car so that I could ask to buy a couple. 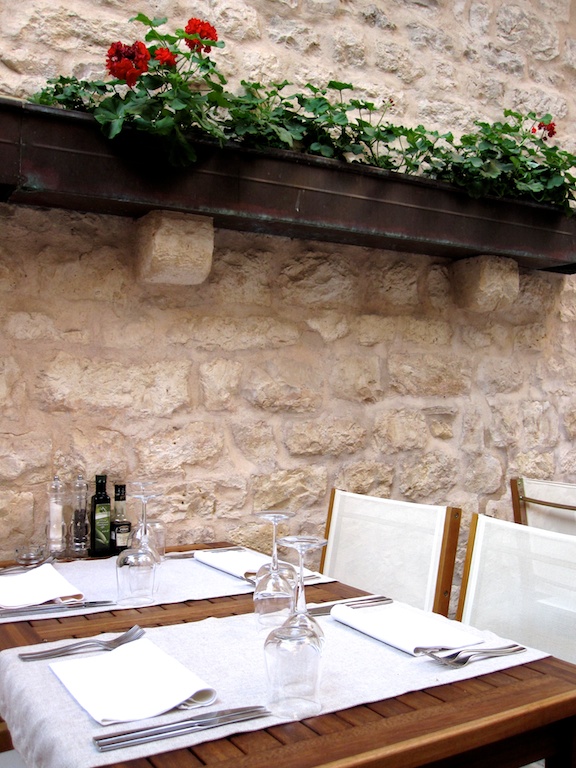 This table is from a restaurant located in the old town of Hvar. The restaurant is modern and run by young chefs. In addition to small aperitif glasses of gazpacho, we ate sea bass cooked according to an ancient recipe of the island. The bass was cooked in a pan with sliced ​​potatoes (fabulous) and beets.

FIORANO
In the first weekend of September, we went to view a cousin who lives in Grottammare in the province of Ascoli Piceno with my sister and my brother-in-law. We didn’t want to take advantage too much on their generous hospitality, so we decided to go to sleep in a bed and breakfast in the area.

The place that my sister patiently found was pleasant where everything was magical and in harmony. The table you see is at the Agriturismo Fiorano and is prepared for breakfast in the morning, with food that is fragrant, delicious, and homemade.

The farm is at the center of an area of ​​hills covered with vineyards and olive trees with the Sibillini Mountains in the background. It produces oil, organic wine and almonds which are served for breakfast in pleasant small bowls (as seen in the picture). Everything is in  harmony and the world with its problems that seem very far away. The owner is passionate about cooking and through this he transform the old farm of his parents into a small place of delight. I’ve known the Marche region for many years and in my opinion, it is one of the most genuine places in all of Italy along with the Maremma. 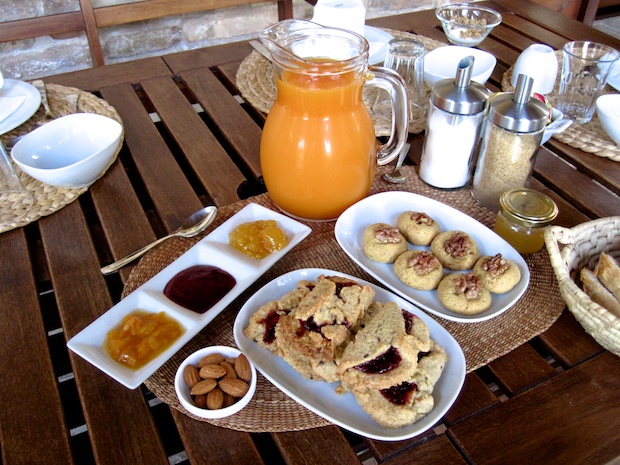 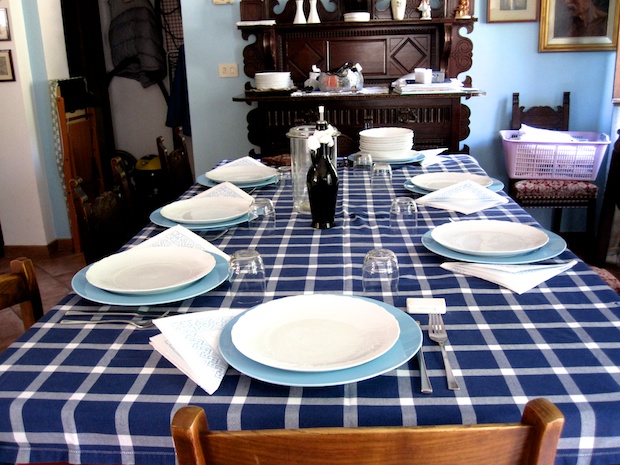 This photo shows the table of the family where we spent the first weekend of September. At the head of the table is Sergio, a very mature 15 year old boy with a great passion for cooking. I was surprised at the professional manner with which he speaks of flavors, food combinations and cooking times. His parents prepared an exquisite fish and he delighted us with chocolate sweets with a soft center and a delicious chocolate cake with cinnamon. This little boy that I am happy to have gotten to known is one of those young people whose hope for the future is not only of Italian cuisine, but of society.