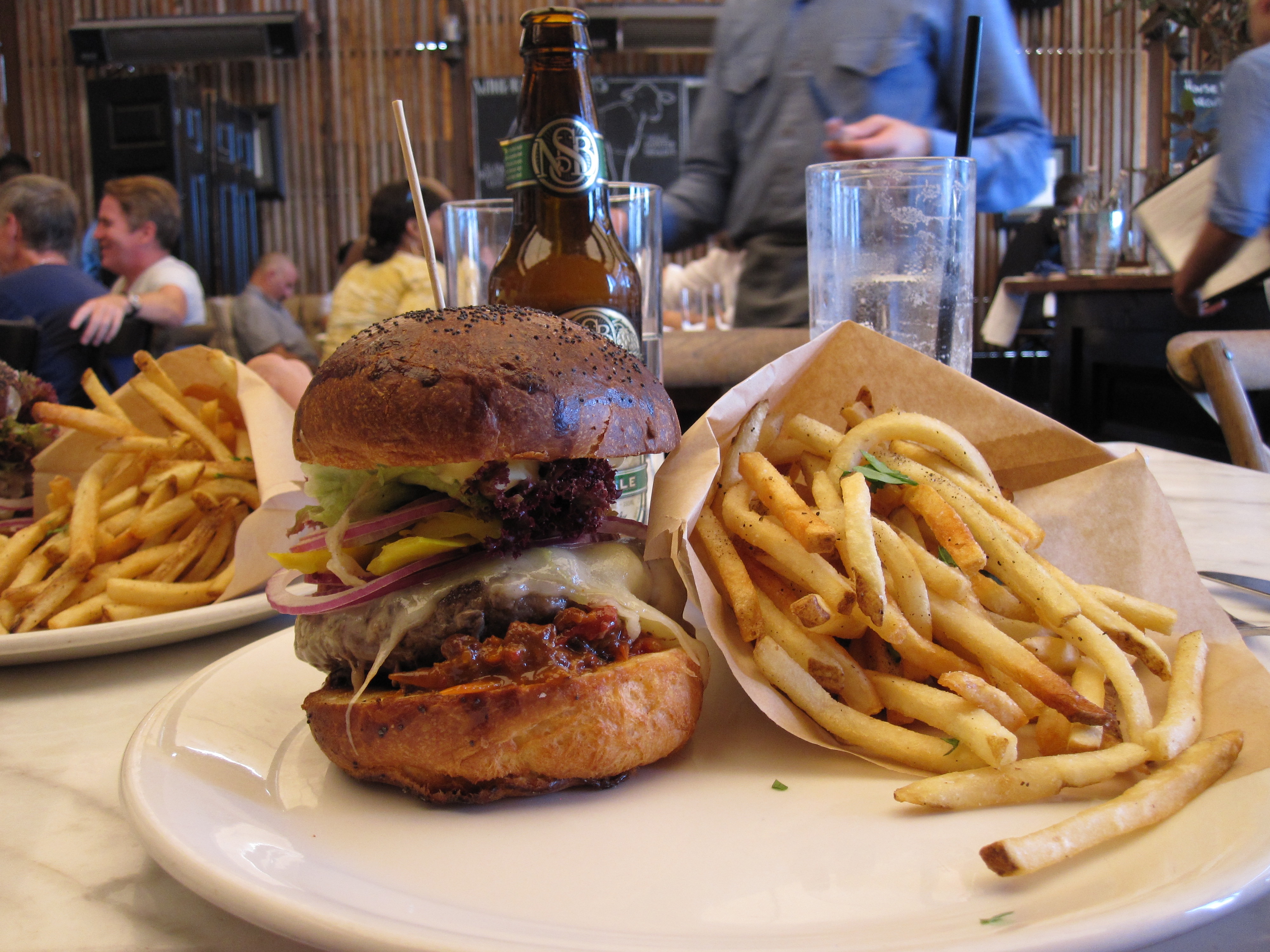 For my generation, California is a mythical place and a symbol of freedom. On August 23, 2013 I had the opportunity to take the trip I had always thought about with my husband.

This is a travel story that has food as its theme. The first day after we had a lot of time after we arrived thanks to the 9 hours time difference less than in Italy. We settled into the hotel and after we picked up our rental car, we had the whole afternoon ahead of us.

The first trip was out to Venice Beach, one of the famous beaches of Los Angeles. The very large beach of fine sand and as usual in the U.S. without sun beds and umbrellas, which makes the feeling of freedom more alive.

The chaotic and popular pedestrian promenade was lined with tourist shops and pharmacies that sold “medical marijuana”. In this chaos a little restaurant named “Venice Ale House” materialized before our eyes. It was all made of wood and full of young people shouting that advertised natural and organic products.

We sat down and savored a natural drink made ​​from ginger root and a burger accompanied by a particularly delicious salad and dips.
The first part of our journey was characterized by this typical product of fast food restaurants in some of California was transformed into quality product for the search of raw materials and cooking.

The second experience in this regard was the restaurant “Eveleigh” on Sunset Boulevard between Hollywood and Beverly Hills. The day was very hot and when we walked through the entrance of the place that reminded me of a pergola of a cool garden, we entered without worrying about the signaling guides.

The interior appeared intimate and familiar, with structures in old wood and fabric chairs excellent experienced and welcoming. The sandwich was excellent the meat was very fragrant. We had a nice meal that satisfied us also until dinner. 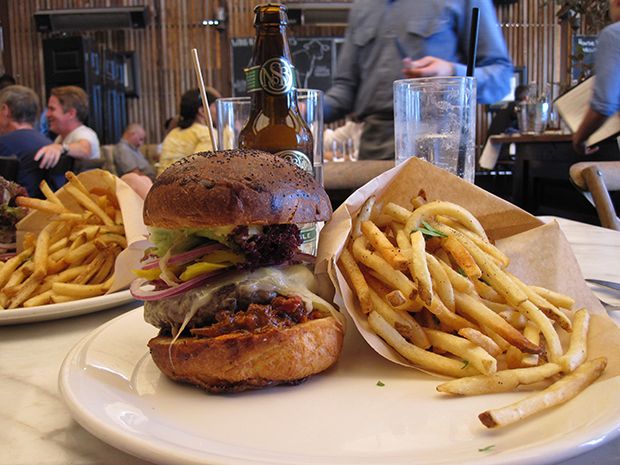 What impressed us most in this city was the majesty of the streets, up to 7 lanes on the freeway in each direction and permanent traffic day and night.

The classic residential neighborhoods and places that we learned about the many films we’d seen, giving the feeling of being in an episode of some television series and make you feel immersed in a world that is almost unreal.

A two-hour drive from Los Angeles as you head south towards San Diego we relaxed in Laguna Beach. This is a magnificent place with cliffs overlooking the sea, where there are small coves of fine sand.
The sea still remained prohibitive to take a swim. The waters of the Pacific Ocean on this coast are cold, in fact, the surfers here always have wetsuits.

Below is our stop was at the restaurant “Las Brisas” where we enjoyed two excellent fish dishes from the Pacific Ocean accompanied by crunchy vegetables. 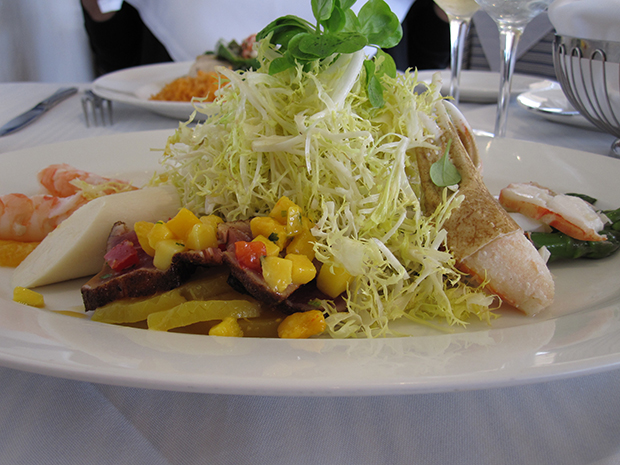 The biggest surprise turned out to be the dessert with a taste that we could not resist, the “Florentine Basket” was delicious. 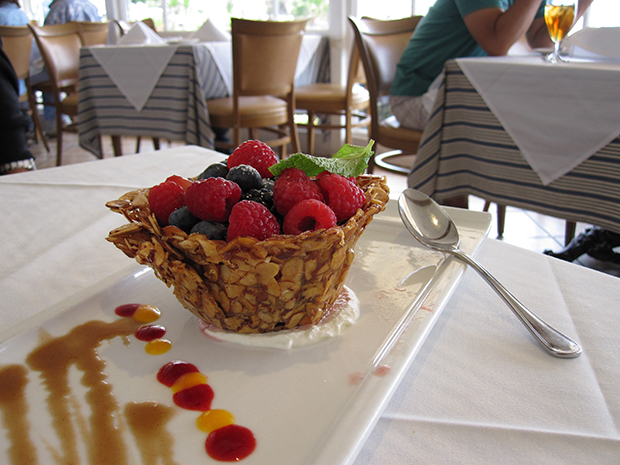 Intrigued by the name of the dessert we made inquiries and found out that the family who owns the restaurant were Italian. Something of our culture shines through in the dishes even though the ingredients are all Californian.

I discovered with astonishment that California produces 70% of the almonds in the world and is a major producer of raspberries, strawberries, blueberries. The cultivation of these fruits we have seen during our entire trip along the north coast of California, as you can see from this picture taken also to Monterey just south of San Francisco. 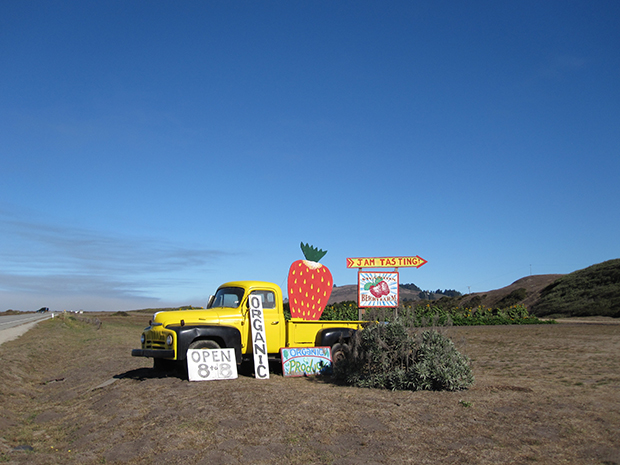 We embarked on the journey north and our first dinner was at the pier in Santa Barbara. My husband, considering that in the restaurants where you can eat fresh fish must fit into a list and queuing, wanted to spend the time with a glass of Chardonnay from the county of Santa Barbara. The small wine of a family of winemakers is at the center of the large wooden pier in Santa Barbara. It is nice to enjoy a good glass in this place looking at the boats as the sun sets. 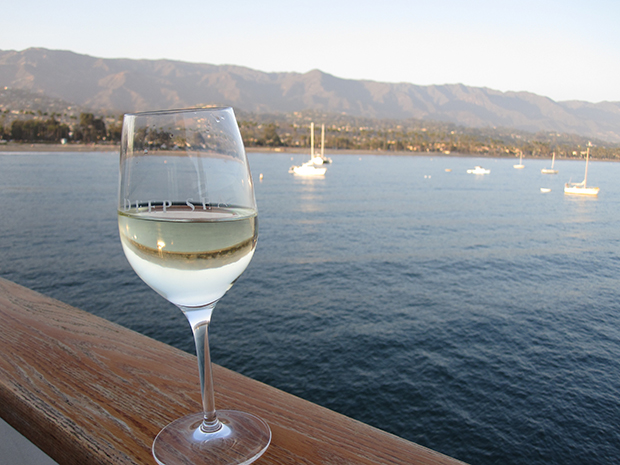 Continuing on we stopped at Pismo Beach to enjoy a traditional cinnamon bun prepared in front of customers to view the manner of the old west at the bakery “Old West Cinnamon Rolls”. 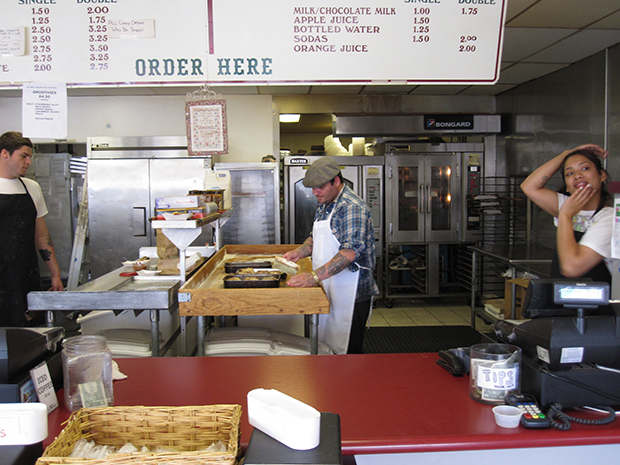 This beach has a link with Italy. The actress Annamaria Pietrangeli met at the pier of this place with the actor James Dean at the time of their love story.

On our trip we viewed extended fields of crops of cabbage, and the variety Americans eat raw in salads accompanying dishes of meat and fish. We stopped to photograph wafted in the air and a strong smell of cabbage. 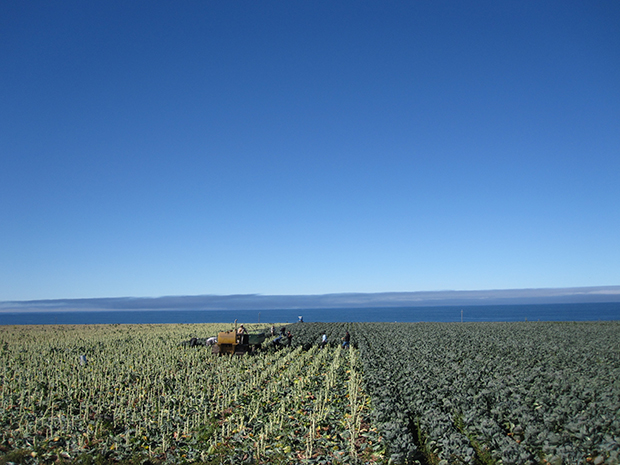 The most scenic part of the coast to San Francisco is represented by natural Big Sur. The Americans say it is more of a place of mind than that of a geographical point. It is a wild coast with a road that runs to the sea and provides stunning views. 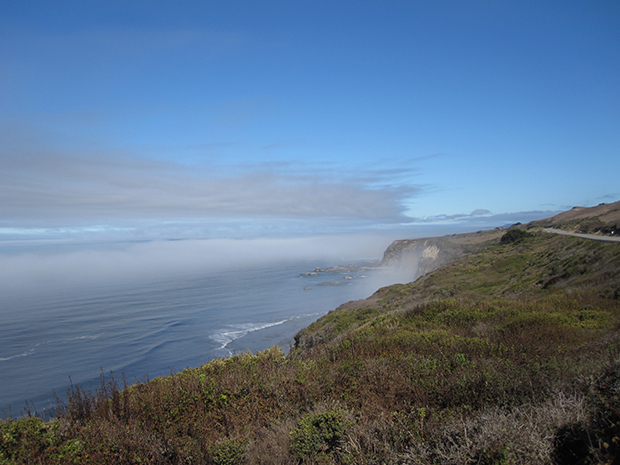 At the top of this path is the cafe restaurant “Nepenthe” in Greek it means “island without pain”. In fact, the views from the terraces that open the windows and make you forget everything. In the 40s the likes of Orson Welles, Henry Miller and the prophets in the 60’s Beat Generation found inspiration here. I warmed myself up (it was cold) with an excellent bowl of chili. 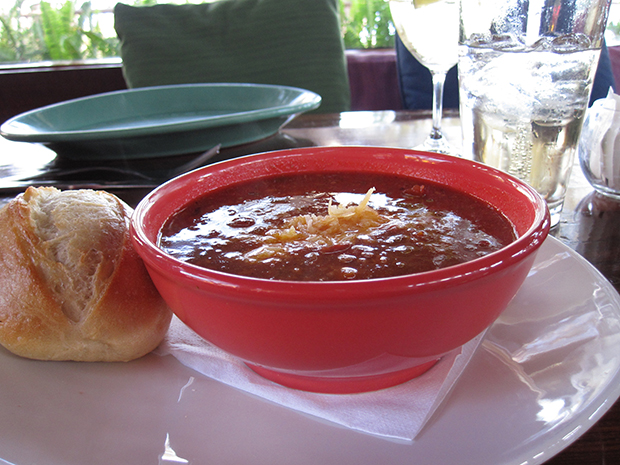 San Francisco welcomed us with its typical fog, which has the advantage of creating the most beautiful scenic views. Here we met up with Andrea and Colleen where we relied on them for our dining destinations. I found that this city is a great laboratory of food.
Some famous dishes and cocktails were invented here as recalled by a panel that is proudly displayed in a small museum in the port Boudin bakery. 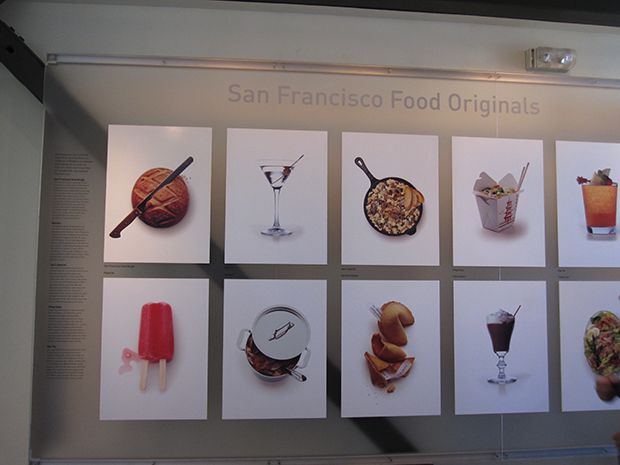 In the port area there is a large market of farm produce. 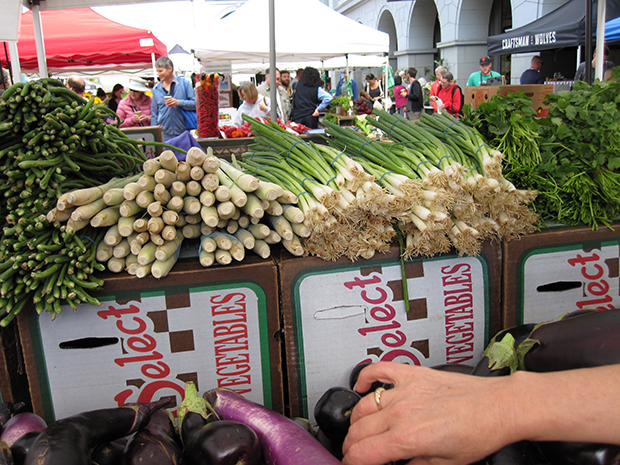 And the fresh produce of the sea, especially the giant crabs and lobsters. 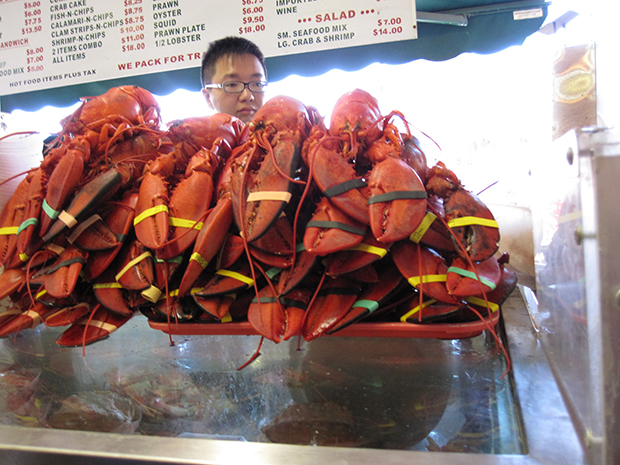 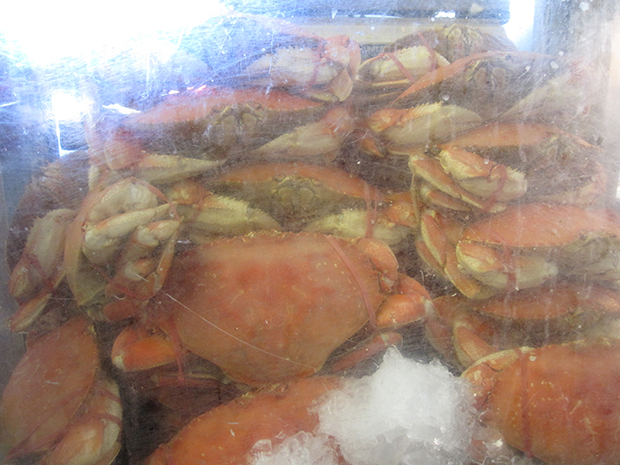 These are cooked in stalls and served in bread to passersby. We tasted the goodness of this bistro Boudin in the form of soup and salad. 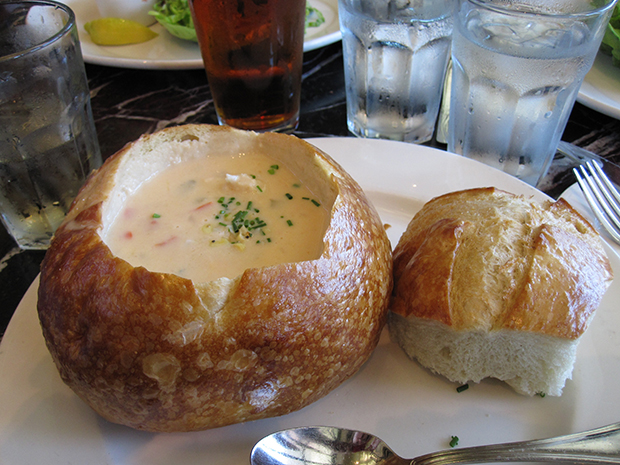 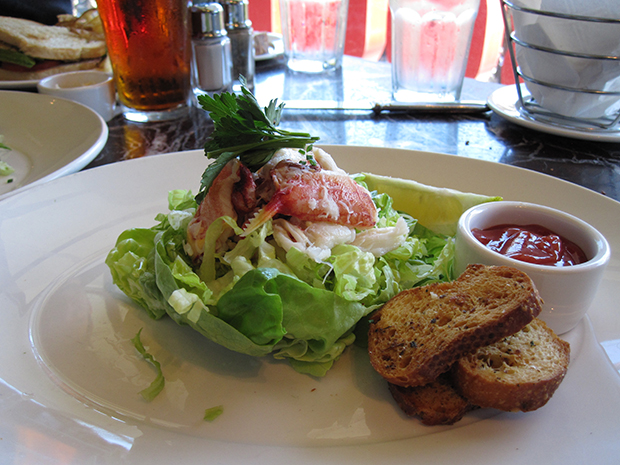 The bread fundamental element of the restoration of San Francisco, there are very good sandwiches that we enjoyed in the bakery, “Tartine ” where the bread is baked and served still fragrant, stuffed in a variety of ways. 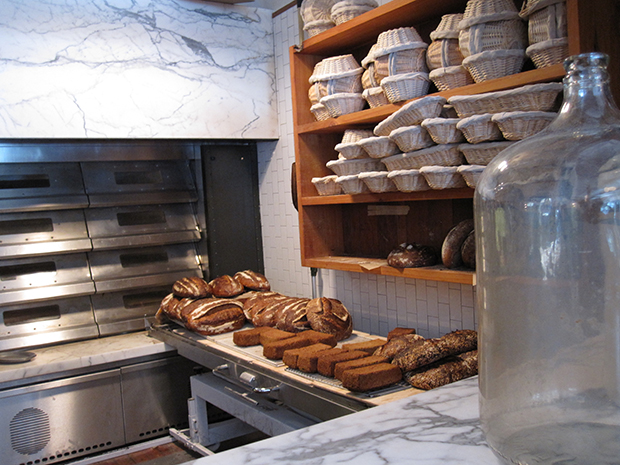 An interesting feature for us Italians is that San Francisco is a capital of American coffee. There are many bars which roast their own coffee and they serve a very wide variety of types of mixture.
We tried to “Four Barrel”, and it was very aromatic and flavorful. 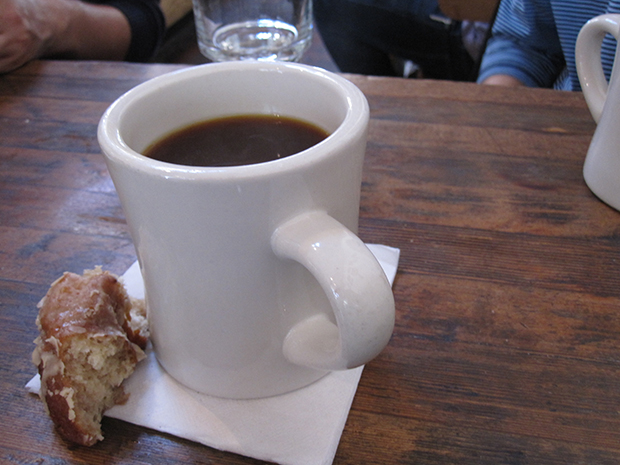 Our stay in the city led us to spend the night in a small town Oakland within the beautiful bay. Here the rooms are very comfortable and one of the least expensive around the city. An underwater tunnel connects with a train in 20 minutes to San Francisco. Try it.

Oakland is famous because at the birthplace of the writer Jack London ‘s famous book “White Fang”. On the waterfront that bears his name overlook many of the restaurants. We tried one called “Bocanova”. In a table that overlooked the bay we were served a very good cut of beef according to the fashion of the place. 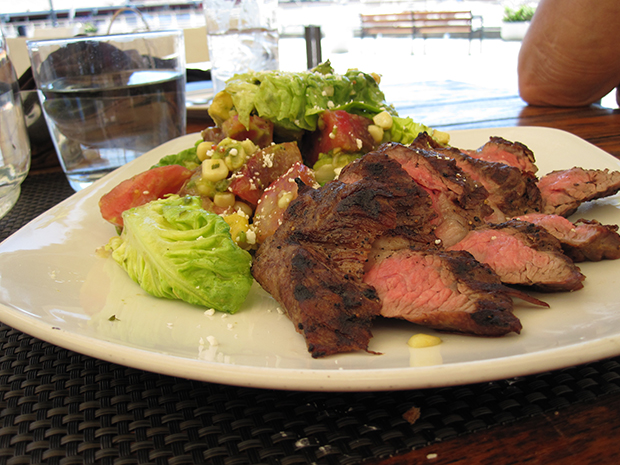 Our journey could not miss a visit to Napa Valley, with its vineyards and famous wineries. The landscape of vineyards is very special, surrounded by hills completely burnt by the sun. This contrast of the yellow dry grass with the green of the leaves of the vine, irrigated with a drip system, make a landscape that is truly unique.

We made a stop in a small shop “Oxbow Public Market” reminiscent of the emporiums of the films on the How the West Was Won and ate sandwich that was very particular filled with figs, arugula, and turkey. 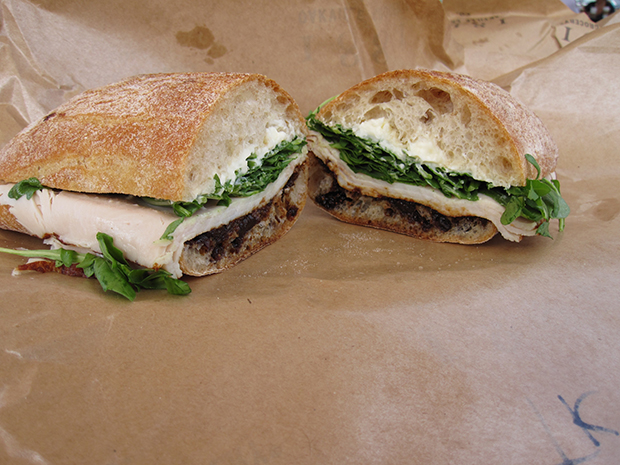 After the wine tasting we sent within California to visit Yosemite National Park. Before you enter this magical place we stopped in the small village of Mariposa, a small town developed at the time of the gold rush. By that time has remained the imprint in the buildings along the main street.

At the restaurant “Savoury’s” we refreshed after the long journey. I enjoyed a simple vegetable soup made ​​pleasant by the addition of spices on which predominated spicy curry. 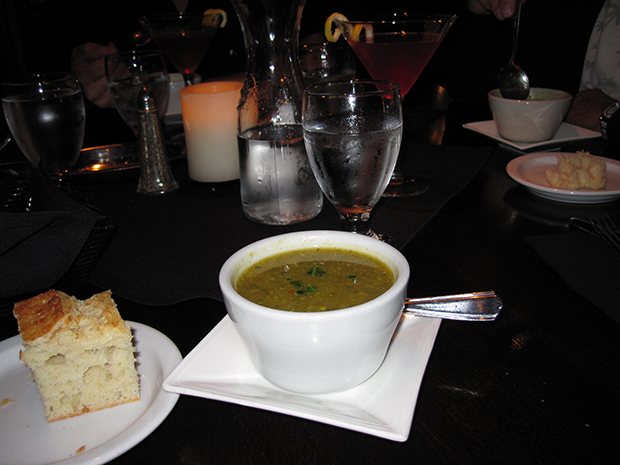 Our journey ended here in California. On the way to the airport we met a fast food chain “In-N-Out Burger” where the fries are strictly fresh (not frozen) and meat was top quality. The workers were young and cheerful. 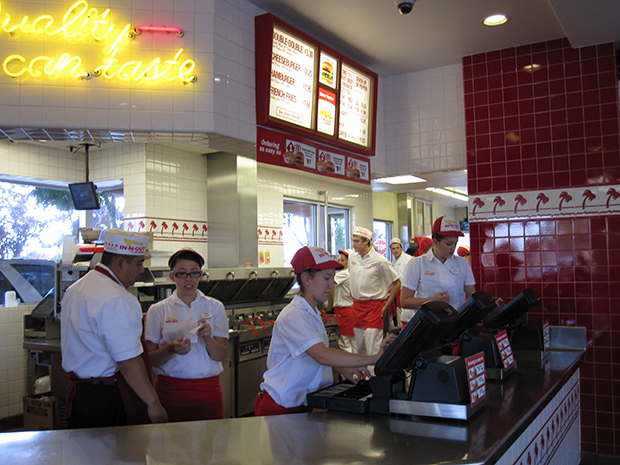 Before returning to Italy we went in New Jersey and Baltimore, but I will speak about those trips in the next blog post.