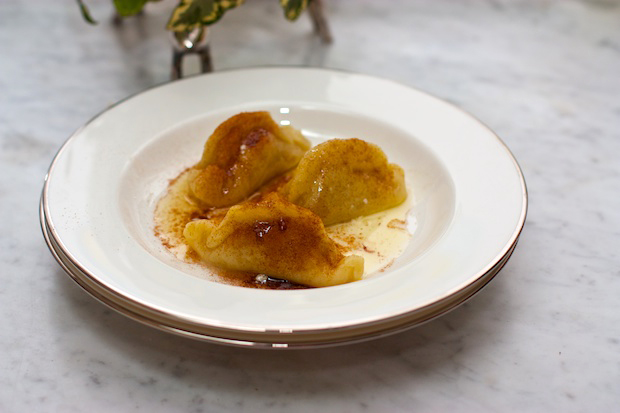 I tasted “cjalsons” for the first time in Tolmezzo in the 70s, in the restaurant of the most famous chef in Carnia, Gianni Cossetti.

Their aroma thrilled me. Mixing sweet and savory flavors in a potato-based pasta wrapper is truly brilliant. This recipe comes from the imagination of the women of Carnia who have always been accustomed to making with what “you have” at hand and at a low price.

It is said that this recipe was already made in ancient times by the wives of the “cramars”: in the winter they loaded a sort of wooden backpack with many drawers on their backs and went to sell their spices in Austria, Germany and Slovakia. These spices were recovered by Venetian merchants who imported them from the Far East. When these street vendors returned, the wives collected all the leftovers and created the filling for these ravioli. Pears, plums, quinces, ricotta and butter are the typical products of the place. Potatoes were not a problem because every vegetable garden in Carnia produces them of excellent quality and therefore it was enough to buy a little flour. There are as many variants of this particular ravioli as there are families in Carnia. This one that I present to you is my favorite.